One of the biggest pop culture phenomena in Asian America hit us 24 years ago; and she wore yellow all the time.

When the Mighty Morphin Power Rangers (adapted from the Japanese series Kyōryū Sentai Zyuranger) debuted, producers knew it would be successful, however, nobody could predict the insanity among its young audience that it produced.  Spawning astronomical amounts of T.V. spinoffs, films, action figures, costumes, and forever nerds.

Praised for its diversity (let’s stop and think that this was 1993), one of the more popular rangers was the yellow ranger Trini, played by the late Thuy Trang.  Now, if you watched the show, you may have noticed Trini was Asian, prompting a cacophony of criticism for its racially based casting but producers claim coincidence because the yellow ranger role in particular was cast very late (Trang actually made her debut in the second episode as another actress debuted the role in the pilot) so, coincidence it truly was.  However, this accidental casting became one of the greatest forms of representation amongst young Asian American girls, well at least for those of us who weren’t quite mature enough to jump on Waverly Jong’s emotional adventure.

Asians became correlated with the color through the term “Yellow Peril“.  The term originated in the late 19th century with the influx of Chinese workers legally immigrating to the U.S., Australia, Canada and New Zealand, agreeing to work for lower wages than the local white population and in turn they were demonized for their skin pigment because all these haters couldn’t think of a more intelligent insult besides skin color. 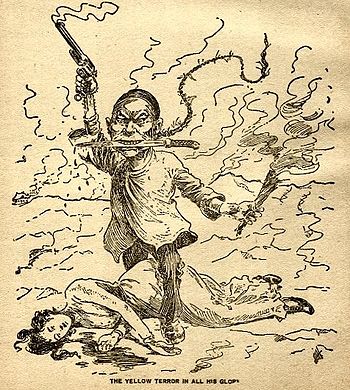 Throughout the years, we have seen an assertion of the term to proclaim Asian identity. During the civil rights movement, there were countless signs noting the solidarity between Black Power and “Yellow Peril”, Don Lee’s collection of short stories (2002) titled “Yellow” explores the lives of diverse Asian American experiences, and in the internet age, blogs, Instagram accounts, and Twitter handles all attribute to the fluid significance of the term.

Trang’s character received immediate backlash concerning how her character may encourage stereotype due to the fact that she was associated with the color yellow, however, regardless of her attire, her positive characterization on such a public platform transformed her into a role model for young Asian American girls.  Trini was a badass and extremely diverse; she knew marital arts, gave back to the community, was headstrong, and had a fondness for creepy dolls (exhibited in S1, Ep. 9, where Rita Repulsa turns her favorite doll into a monster, SAVAGE).

She was one of the first actresses to garner a main role on a television series (Margaret Cho’s “All-American Girl” didn’t premiere until 1994), and quickly assumed the role of idol amongst her young audience.  Trang was the first Asian woman I had ever seen on TV; I was 6 and it didn’t even occur to me that any woman who looked like me could even get to that level of publicity and be herself in the way she did.  The yellow ranger was hardly the submissive, frail, and honorable girl society repeatedly tells us we should be; she was über masculine (she wore a lot of vests, and collared shirts), she kicked any ass where it was deemed necessary, and was outspoken on every level, something I never experienced in my life until I laid eyes upon Trini.

Based on contract disputes, Thuy Trang left the series abruptly in the second season, and sadly in 2001 she passed away in a car accident near San Francisco.  Albeit her short time on the series, Trang has influenced countless twenty-something Asian American women: in 2014 rapper Awkwafina released her solo album “Yellow Ranger” and a subsequent title track that shares the same name, and popular blogger Lo Espejo titled her blog “YLWRNGR“, as a product of how she was impacted by the famed ranger.

I will never forget how important and valid my experience was watching Thuy Trang’s run on the Mighty Morphin Power Rangers and how it proved that as Asian American women, we can, not only achieve success but be our honest selves while getting ours. And with the thirst for more diversity, we can only hope that the Constance Woos, Lynn Chens, and Mindy Kalings out there will get their opportunity to be a yellow ranger.